The Birkenstock Man From Curacao 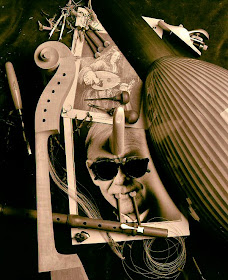 José Verstappen, the executive director of Early Music Vancouver, is the coolest man around. Rain or shine, winter or summer, the man wears socked Birkenstocks. I swear I once saw him walking on 7th Avenue (near EMV's headquarters on Hodson Manor)in shoes because it was raining. Mr. Verstappen refutes my version categorically.

Verstappen, a Renaissance man (he does the web site design, the publicity, the typography, probably vacuums, too) with the help of that other Rennaissance man, Ray Nurse( baritone, lutenist, lute maker, etc) has steered the organization (for 26 years since its founding) into the success that it is today. EMV has brought the best baroque groups from around the world and employed local baroque musicians as teachers and performers in UBC's Vancouver Early Music Programme & Festival. Starting in smaller venues as the much maligned (I loved it!) Metropolitan Tabernacle, EMV can now routinely fill the Chan Centre.

But for me, Verstappen has pushed what many consider the normal boundary of the baroque period (the 18th Century) so that through groups like Ray Nurse's La Cetra we are now exploring Bach's early cantatas and listening to composers of the fantastic period of the 17th Century. With the help of local virtuoso violinist Marc Destrubé EMV is also exploring the period immediately after the baroque with performances of Mozart, Hayd, and Beethoven in period instruments.

Verstappen, the cool man, has brought us downloadable concert programs with extensive information on what you are going to listen to. His beautiful Early Music Vancouver Calendar (particularly useful as it runs from July of one year to June of he next) graces our fridge with the help of one stout Lee Valley magnet. But best of all EMV promotes the idea that young people should attend concerts. Any adult can bring a youth for free. I wish such organizations as Ballet BC and the VSO adopted similar plans.

The paradox, the wonderful paradox, is that thanks to José Verstappen and his EMV when I go to one of their concerts I am magically transported back to the time when this music was exciting and new and had never ever been played before.

Late happening adendum courtesy of José Verstappen: I need to indeed refute your comment on me wearing shoes because it was raining; the only occasion I sometimes forget my Birckenstock loyalty is when there is slush after a heavy snowfall.